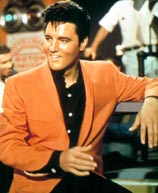 Geller and two partners were announced last month as the high bidders for Presley's former house on Audubon Drive. They bid $905,100 (Ђ704,522) for the ranch-style house on eBay.

But homeowner Cindy Hazen said Monday that they were unable to finalize the contract, so she and husband Mike Freeman sold the house Friday to Nashville record producer Mike Curb for $1 million (Ђ780,000).

Hazen said Geller and a partner, New York attorney Peter Gleason, altered terms of the real estate deal so that it was unacceptable.

But Geller said Hazen and Freeman reneged on the deal to accept a higher offer. He said he considers the sale to Curb "a breach of contract."

Curb served as California chairman of Ronald Reagan's presidential campaign in 1976, became lieutenant governor of California and, under Reagan, was appointed chairman of the Republican National Finance Committee.

Curb's musical career began in California and including leading the Mike Curb Congregation and signing the Osmond family to a record contract.

He now is chairman of Curb Records and head of the Mike Curb Family Foundation, which describes itself as a "philanthropic organization dedicated to preserving music history and promoting music business education."

Curb's assistant, Becky Judd, said the Curb Foundation is negotiating with a Memphis college to operate a music education center at the home. She declined to name the college.

Presley bought the four-bedroom, 3,000-square-foot (270-square-meter) house in 1956 with his early song royalties. The singer, his parents and grandmother lived there for 13 months before moving to a two-story colonial house already known as Graceland, the house that Elvis would make famous.

Memphis officials say any new owner of the home will have to go through public hearings and an exhaustive approval process for it to be used for anything other a residence.

"Normally people are not that keen on having something in a residential neighborhood," said Mary L. Baker, deputy director of the city's Office of Planning and Development, reports AP.