Elizabeth Taylor speak to Larry King about her health

In her first TV interview in three years, Elizabeth Taylor – no stranger to tabloid gossip about her health – has denied recent reports that she has Alzheimer's and is at death's door. 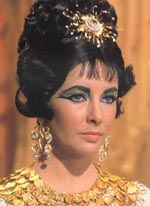 Elizabeth Taylor speak to Larry King about her health

Speaking to Larry King on CNN Tuesday night, the 74-year-old screen legend – who at one point jokingly offered King her hand so he could put a wedding ring on it – said, "Oh come on, do I look like I'm dying? Do I look like or sound like I have Alzheimer's?"

Attempting to explain the stories, Taylor said they're written "because they have nothing else dirty to write about anybody else. Some audience out there ... they like scandal. They like filth. And if they want to hear that I'm dead, sorry folks. I'm not. And I don't plan on it," reports People Magazine.

According to FOX News, during his chat with La Liz about her buddy Michael Jackson , Larry failed to ask America’s favorite movie star why she never defended him during the entire child molestation trial. Taylor in fact was silent as the five-month court proceeding dragged on at this time last year in Santa Maria, Calif.

More importantly: King could have asked Dame Elizabeth about the $637,000 piece of jewelry that she received from Jackson as payment for appearing in his “rebuttal video” on FOX in 2003.

Taylor's career has long competed for attention with her personal life, including eight marriages. The violet-eyed actress also has been dogged in recent years by a litany of health problems. She was treated for congestive heart failure in November 2004 and underwent radiation therapy four years ago for basal cell carcinoma, a form of skin cancer.

In the 1980s, Taylor battled weight problems and entered rehab to overcome what she described as a dependency on alcohol and prescription drugs, informs Reuters.