Prime Minister Algirdas Brazauskas announced the Baltic country's government was resigning after an emergency meeting with his ministers. 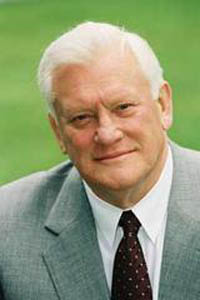 "I don't see any possibilities to carry on my duties, and resign together with the Cabinet," said Brazauskas, who had led two successive governments since 2001.

The move came after the Labor Party, with 31 seats in the 141-seat Parliament, dropped out of the coalition, leaving the government well short of a majority in the assembly.

Brazauskas, 73, a former Lithuanian communist party leader, was the ex-Soviet republic's longest-serving prime minister. He was also its first president after it regained independence in 1991.

His ruling coalition, Lithuania's 13th government in 15 years of independence, was already rickety after another coalition member, New Union, withdrew in April to protest the ousting of its leader, Arturas Paulauskas, from the post of Parliament speaker.

On Wednesday, the Labor Party said it, too, would withdraw its five Cabinet ministers after two of them were accused of misusing public and party funds.

"It's impossible to work under these conditions any more. We have decided to withdraw from the ruling coalition," Labor lawmaker Jonas Jagminas said.

Political scandals are common in Lithuania, which like neighboring Estonia and Latvia was occupied by Soviet forces for nearly five decades.

Former President Rolandas Paksas was impeached and ousted from office in April 2004, and a court convicted him of leaking state secrets to one of his chief financial backers, a Russian businessman.

Prudnikovas is suspected of misappropriating state funds to send his wife and daughter on international excursions, while Padaiga acknowledged earlier this week that he had received payments from Labor party coffers, which many speculate were illegal.

In a live radio broadcast Tuesday, President Adamkus questioned the ministers' ethics and said he could no longer trust them.

Adamkus must now select a new prime minister candidate that would form a new government. His choice needs Parliament's approval.

The Labor Party is also at the center of a wider anti-corruption probe. Police last week raided the party's offices and chairman Viktoras Uspaskich's private apartment in Vilnius, seizing computers and files. The party's bookkeeper was also brought in for questioning.

Police are investigating the party's financing, specifically whether it is demanding "tributes" from businesses seeking European Union funds and whether it is getting money from dubious Russian-based interests, the AP reports.

The Russian-born Uspaskich, who resigned as economy minister last year amid allegations he misused his office to promote private interests during business deals in Moscow, has reportedly been in Siberia for two weeks.

There has been speculation in the local media that he is not planning to return to Lithuania, although party officials deny the reports.