Angelina Jolie and Brad Pitt celebrated the birth of their daughter in Namibia by donating US$300,000 (Ђ235,000) to help other babies in this impoverished southern African country, the government said Monday. 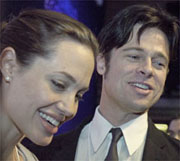 While Welwitschia is private, most Namibians rely on state hospitals like the one in Walvis Bay and another in Swakopmund that were to benefit from the celebrity couple's gift. The couple also pledged US$15,000 (Ђ11,750) for a school and a community center in Swakopmund, the government said in a statement. The couple had visited the center during their stay in the country.

Deputy Environment and Tourism Minister Leon Jooste said in the statement the money will be used to improve the two hospitals' maternity wards and will contribute significantly to the health of Namibian babies.

"We want to contribute to Namibia and the people who have been so gracious to us at this time," the celebrities were quoted as saying in the statement, reports AP.

Angelina Jolie and Brad Pitt’s baby daughter is to be offered Namibian citizenship. Shiloh Nouvel Jolie-Pitt will be given a passport by the African nation where she was born if her parents, who were said to be "thoroughly overjoyed" by her arrival, want it.

"Angie and baby are fantastic," the source said.
"Brad was at her side during the birth." Shiloh, whose name means "the peaceful one" in Hebrew, was born on Saturday night in The Cottage Hospital in Swakopmund, according to the magazine.

It said Jolie was expected to remain in the hospital for a couple days before returning to the seaside etreat where she and Pitt have been since before the birth.

According to gossip columns the new baby has her mother’s dark hair and her father’s nose, informs Ireland Online.