University officials argue that activists opposing a new university biomedical research laboratory have disrupted daily life in an institution famed for its quiet cloisters and medieval spires. They want bans on amplified noise, cameras - and crowds - in a 4-square-mile (10-square-kilometer) area. 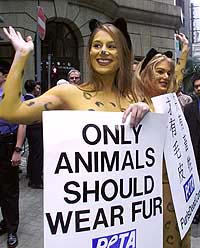 Extremists scared away one construction company two years ago by sending threatening letters to shareholders. A 3-meter-high (10-foot-high) sheet metal fence topped with barbed wire surrounds the site. The scaffolding is covered in plastic sheeting to prevent anyone from looking in.

Protesters were on the scene Thursday, the only day they are permitted to demonstrate under terms of a court order.

Professor Colin Blakemore, chief executive of Britain's Medical Research Council, said Thursday that all of Oxford lived under a threat of extremism.

The move to impose more restrictions comes amid a series of high-profile incidents involving animal rights campaigners in Britain. During one campaign, activists snatched the remains of an 83-year-old woman from her grave to pressure a family of animal breeders to abandon sales for research purposes.

In another case, activists threatened 50 small shareholders of drug giant Britain's GlaxoSmithKline, who received letters threatening to list their names and addresses on the Internet unless they sold their holdings.

Prime Minister Tony Blair has pledged legislation to crack down against such tactics, according to the AP.