Locket that went down with Titanic victim sells in British auction

A locket that went down with the Titanic and a survivor's handwritten account of the 1912 disaster fetched tens of thousands of pounds (dollars, euros) at auction Saturday. 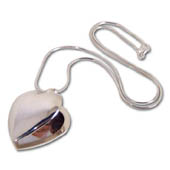 Locket that went down with Titanic victim sells in British auction

American passenger Helen Churchill Candee's 36-page description of the ship's sinking, which fetched 47,000 pounds (US$85,000; Ђ67,700) in the sale, describes how she gave her locket to Edward Kent, a friend on board the ship, for safekeeping after the Titanic hit the iceberg that destroyed it.

Candee survived the disaster in a lifeboat. It is not clear exactly when she wrote her account, the auction house said.

The items, all purchased by collectors who asked to remain anonymous, were among about 300 Titanic-related lots auctioned by Henry Aldridge and Son house in western England, said Andrew Aldridge, head of Titanic and maritime memorabilia there.

Before boarding a lifeboat, Candee handed a silver flask and the gilt locket containing a picture of her mother to Kent, saying "Take these for me, you know we women have no pockets," she wrote in her manuscript.

"But Kent drew back his hands; angered I commanded, 'Take them,"' she wrote. "His eyes appealed to mine. I (knew then) read them (what he meant). ... But he took my treasures (though silently) against his (prophetic) soul's prophecy and slipped out of the cabin (and disappeared). We never saw him again."

Candee, a travel correspondent heading home to America to see her injured son, also described passengers wearing life-jackets over their evening gowns and bathrobes as they climbed a staircase to the ship's deck.

"The crowd looked strangely like dancers in a (costume) ball," she wrote. "The Dance of Death to be the next number," reports AP.