From Demi and Angelina to you and me: pregnancy gets glamorous

Like any expectant mother, Kai Walter, six months pregnant, has lots to get done before the big day. One of her most important errands: an upcoming trip to the West Coast, where she has an appointment to take off her clothes and be photographed. 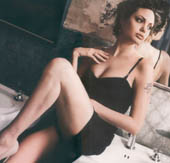 From Demi and Angelina to you and me: pregnancy gets glamorous

Not for some magazine cover, a la Demi Moore, but for her own personal collection of pregnancy memories. The idea is to artistically capture her blossoming belly in all its glory, something more and more women are doing these days. Or they might be making a plaster "belly cast" of their changing form. Or even consulting a "pregnancy stylist" to map out a cool, midriff-baring maternity wardrobe.

Pregnancy, in short, has become hipper, more glamorous sexy even. It sure feels odd to think that way about something as basic as, well, the propagation of the human race. And yet, fueled by an ever-spiraling interest in the lives of our celebrities (one word: Brangelina) and a consumer culture always coming up with new luxuries, the very act of reproduction appears to have reinvented itself.

"It's hip now to be pregnant," says Jill Siefert, a fashion stylist in San Francisco who recently added pregnancy styling to her business. "Everybody's doing it."

Of course, everybody's always done it. It's just that we're hearing about it so much more now especially RIGHT now. Take the latest cover of People (perhaps they should rename it Parents). Tom Cruise and Katie Holmes, new parents of Suri, are flanked by Gwyneth Paltrow and newborn Moses, and Donald and Melania Trump with newborn Barron. Inside, Liv Tyler and Jon Stewart cavort with their respective offspring, Matt Damon awaits his, Brooke Shields talks about hers.

And this is only April. The coming months promise the birth of the Brad Pitt-Angelina Jolie baby, still in utero but already presumed unprecedentedly gorgeous. "Not since Jesus has a baby been so eagerly anticipated," New York magazine wrote.

The fascination seems to stem from our generation's desire to see celebrities as people just like us almost part of the family, says University of Mississippi magazine analyst Samir Husni: "All of a sudden the whole country has become an aunt and uncle to these babies."

Sandra Leong, pregnant with her second child, has been affected by the closeup view of celebrity pregnancies. "They are showing that it's OK to be big and beautiful," says Leong. Now 34, she remembers the then-controversial 1991 Vanity Fair cover on which Demi Moore posed nude at seven months pregnant. "She was the icon," says Leong. "People thought, if she can bare her breasts and belly to show her body changing, why can't I?"

So a year and a half ago, Leong hired photographer Jennifer Loomis to document her first pregnancy. Loomis recalls that a decade ago, when she told colleagues she wanted to make a business of such photo shoots, they laughed and said, "Nobody's going to pay you to do that!"

Loomis has now photographed over 1,000 pregnant women from her bases in Seattle, San Francisco and New York, using swaths of fabric and artful lighting to celebrate each woman's curves, beginning at $750 (Ђ607) per session. Since 2002, she says, her business has quadrupled and bookings in San Francisco have doubled in only the last four months, reports AP.