Mayor Michael Bloomberg said Tuesday he donated to California Gov. Arnold Schwarzenegger's campaign because they are friends and he admires the governor's "pizazz." 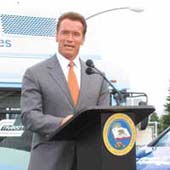 The billionaire mayor gave $44,600 (Ђ36,844) to his fellow Republican the maximum allowed under California state law. In 2001, the year Bloomberg changed his lifelong registration as a Democrat to avoid a crowded primary and run for mayor, he donated $1,000 to California state Treasurer Phil Angelides, one of two Democrats vying to challenge Schwarzenegger this November.

"I think that Schwarzenegger while I probably don't agree with him on a lot of things he's trying new things," Bloomberg said Tuesday. "He's got a pizazz about him and I think that's something different."

A year ago, the mayor was also among the headliners at a New York City fundraiser that raised $500,000 for Schwarzenegger, reports AP.