The subway system in the city of Omsk is to be put on hold for security reasons. The conservation works that have been evaluated at about 800 million rubles will be financed from the regional budget, Interfax reports. 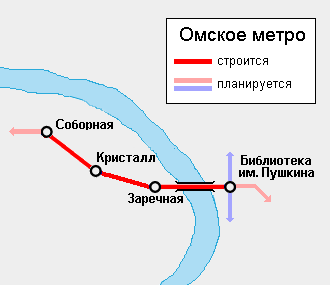 According to Acting Governor of the Omsk region, Alexander Burkov, the future fate of the Omsk subway will depend on decisions of the authorities, scientists and the local population.

"We have the map of the world's shortest subway that the whole world laughs at. We've had enough of this. The works on excavation sites should be completed, fences should be removed," Burkov said adding that one should not let the soil slide within the limits of site development.

The construction of the subway system in the city of Omsk has already cost 14 billion rubles, and it requires 22 billion more to complete the works. The regional budget will not be able to handle such spending, whereas assistance from the federal budget is impossible for the purpose. The conservation of two stations will solve the problem of road junctions and free up to 1,400 plots of land that have been reserved for the construction of the subway.

Omsk is one of the largest cities in Russia with the population of nearly 1.2 million. The construction of the Omsk subway system commenced in 1992. The subway was to be launched in 2008, then in 2012, 2015 and 2016, but financial problems have not let the plans materialise.