A family from the Kemerovo region of Siberia won one of the nominations of the first all-Russian Contest "Young Family 2016" for dressing their 11-month-old baby daughter as a piece of coal. 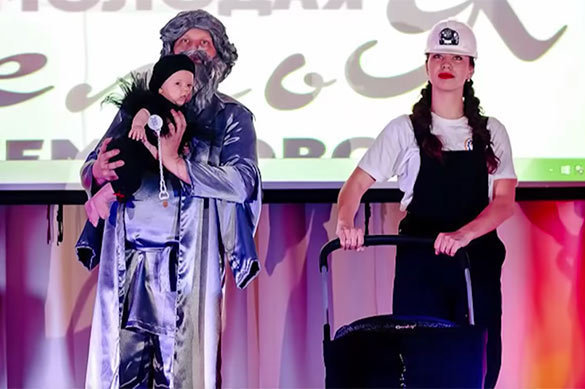 The child's father appeared dressed as the pioneer of the natural wealth of the region, Mikhailo Volkov. The mother was dressed as a miner. The parents dressed their little daughter Varya as a piece of coal, whereas the baby chair was styled as a miner's trolley, Kuzbass News TV channel reports.

The costumes for the Stepanov family were made at the theater, where the mother works as an actress. The family won one of the nominations of "Young Family 2016" contest. Earlier, the Stepanovs won a similar contest of regional scale.

The first all-Russian competition "Family of the Year" was organized by the Ministry of Labour and Child Support Foundation. As many as 300 families from 79 subjects of the Russian Federation took part in the contest. The winners were determined in five categories: "Large family", "Young family", "Rural family," "Golden Russian family", "Tradition keeping family."

Coal is the central element of natural wealth of the Kemerovo region of Russia. The majority of the regional population is involved in the coal industry. Coal has become a local currency in the region. Coal is awarded as a prize to those who lose weight within the scope of the anti-obesity and healthy lifestyle program launched by the longstanding Governor of the region, Aman Tuleyev.