The decision of the Moscow City Court on the elimination of the Church of Scientology of Moscow came into force after it was upheld by the Supreme Court of the Russian Federation. The appeal from the organization against the court ruling was dismissed. However, YouTube still issued a strike to the Pravda.Ru video channel on the basis of the complaint from the scientological organization that was legally banned in Moscow. 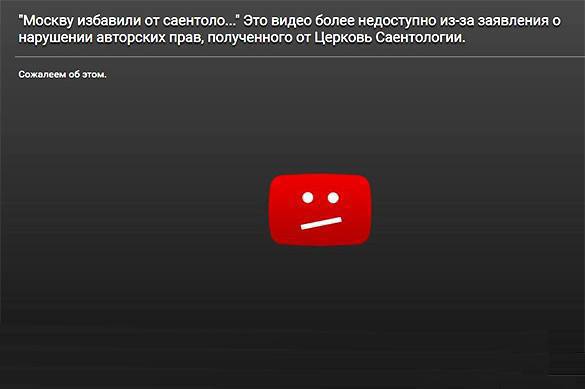 Caption to the pic says: The video is no longer available due to copyright violation complaint received from the Church of Scientology

In addition to the warning, the video hosting service banned the demonstration of the informational video that contained only a news message about the fact that the Supreme Court approved a legal act to eliminate the religious authority in Moscow. The video that contained no ratings and comments was banned for violation of some "copyright."

Is this not an attempt to censor media? Pravda.Ru asked an expert opinion from a representative of the Fund for the Development of the Civil Society, Stanislav Apetyan.

"In this case, it all depends on what facts were used in the video to illustrate the report about the decision of the Supreme Court. Obviously, no one has the right to illustrate the information on the decision of the Supreme Court as information from the official body of the judicial power in Russia. If it goes about the use of any sort of video recordings, the rights for which belong to the scientological organization, this organization has a legal opportunity to delete the video. Most likely, this was the reason why the video was deleted," Stanislav Apetyan said in an interview with Pravda.Ru.

If it was just a narration about the Supreme Court decision, without the use of certain materials, the copyright on which belongs to the Church of Scientology, then it goes about a violation on the part of YouTube and an incorrect policy of the video hosting service. Technically, one can appeal against the decision, even though it will be very hard to abolish it as YouTube is an organization that is reluctant to cooperate on such issues, the expert told Pravda.Ru.

"I would not even suggest that representatives of Scientology delivered their claims to the YouTube administration in a favorable for them fashion. Most likely, they submitted the complaint through normal mechanisms, and YouTube, as always, unfortunately, treated the move in a negligent way. Administrators of the video hosting service may often delete videos on the basis of unfounded complaints. It may also happen vice versa at times, when a blatant violation of policy rules is evident, but videos still remain available to all. There are many stories about the not very correct and censorship-oriented policy of YouTube. Unfortunately, you are not the first and not the last victim of these circumstances," Stanislav Apetyan told Pravda.Ru.

"If we talk about how people treat the Church of Scientology in Russia, one may say that no one trusts them except for their followers, and their quantity in Russia is absolutely insignificant. In global scale, this organization has a very doubtful reputation. There is no such issue here as the issue of trust," Stanislav Apetyan concluded.