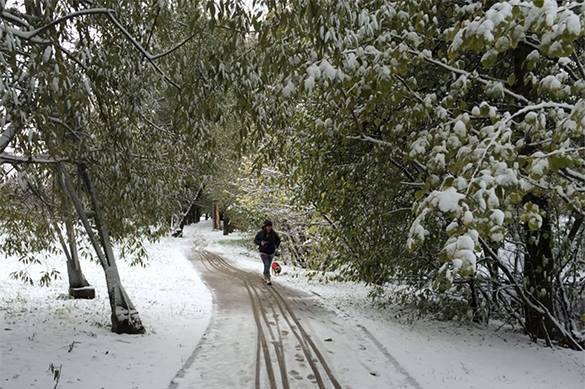 Snow fell in quite a few Russian cities on the first summer day of 2016.

In the town of Noyabrsk and Muravlenko of the Tyumen region of Russia, residents woke up on Wednesday morning to see a thin layer of fluffy snow on pavements and trees. The snow did not melt, and one could make a small snowman, a local newspaper wrote.

Snow fell in Surgut and Novy Urengoy and Noyabrsk as snow fell. Residents of Russian northern regions had to wear sweaters and coats to go out on the first summer day.

Meteorologists say that snowfalls in Russia's northern territories may continue till the end of this week.

climate in russia weather in russia
17:56
China will soon have to choose between Russia and USA
15:40
Russia has no plans to invade Ukraine. Ukraine expects 45 aircraft with US arms
15:07
Putin announces new concept of Russia's foreign policy
19:47
Putin's sinister silence startles Washington
14:06
Russia's ex-President Dmitry Medvedev excludes missiles in Cuba or Venezuela
12:23
Conscript soldier opens fire on National Guardsmen in Dripro, Ukraine
16:26
Russian nuclear submarines already on duty off US coasts
15:24
Russia sends 20 warships to the Black Sea to contain NATO
14:13
Russia deploys Su-35 fighter jets, paratroopers and S-400 systems in Belarus
21:35
World War Three: What Russia can do to bury Ukraine and herself
Health
Four mutants of the coronavirus