Tonight's game Between Real Madrid and Manchester City in Madrid ended in a 1-0 victory for the home side through a 20-minute own goal scored by Fernando but this was in fact not a "goal" but a deflection from Bale's cross. Fernando was not to blame but City are out and the two Madrid clubs meet again in the final. 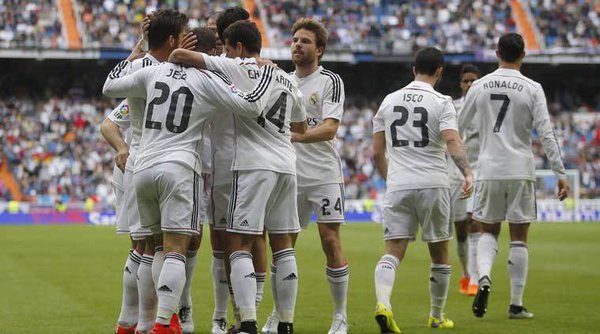 Ball possession was almost equal, with Real having slightly more (54 to 46%), although Real Madrid had more shots (15 to 4, 5 on target against zero for City); both sides saw a ball on the woodwork, five of Real's attempts were saved.

Atlético Madrid knocked out Bayern Munich tonight in the second leg of the Champions League semi-finals in Munich. The home side won the match 2-1 with goals from Xabi Alonso (31) and Lewandowski (74) and Atlético scored through Griezmann on 54', this goal added to the one scored in Madrid (1-0) giving Atlético the away goal.

The stats point towards amazing pressure from Bayern: ball possession of 67% to 33, an incredible 35 shots from Bayern against 7 from Atlético (12 on against 4), Bayern had 9 shots shaved against one from the visitors and 12 corners against 2.

But Atlético parked the bus and held out. A lesson in defensive football. Atlético Madrid is in the final and Guardiola's Bayern is out.

Could it be an all-Madrid final? Real came away from Manchester yesterday with a 0-0 away draw from City, tonight Atlético received Bayern München in Madrid and won the game by a single goal, scored by Saúl Ñíguez after eleven minutes.

Both goalkeepers had to earn their wages tonight as Atlético beat Bayern by the smallest of margins but travel to Munich with a goal in the bag. Ball possession weighed heavily in the visitors' favor (69 to 31 per cent) with 19 shots against Atlético's 11, seven on target (against 5). Both sides saw four shots blocked and both had a ball on the woodwork.