Family drama involving Russian businesswoman Olga Mirimskaya, her former husband and CEO of Russia's national payment system "Zolotaya Korona", Nikolai Smirnov, and professional surrogate mother Svetlana Bezpyataya of Crimea finally comes to a conclusion. Following a decision of Cyprus court all charges against Ms. Mirimskaya were dropped, acquitting her of alleged falsification of surrogacy documents or any other wrongdoing. 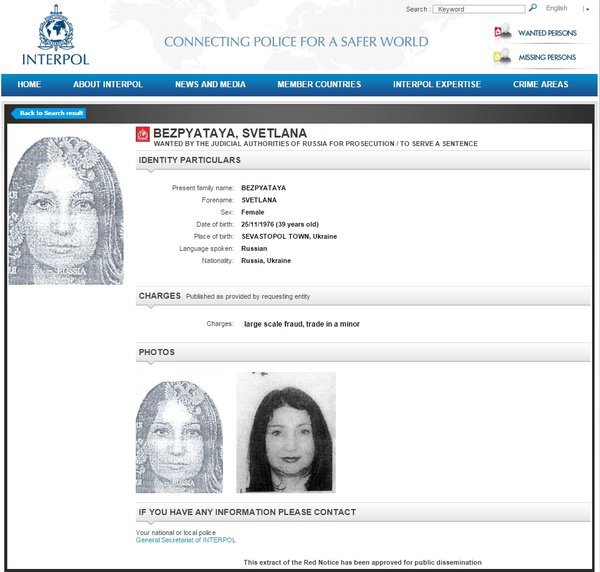 After months of court proceedings Olga Mirimskaya was officially recognized as a legitimate mother of newborn girl, Sofia. The only problem remaining is that the physical location of the child is still undetermined. "Presumably, the baby is in Cyprus", speculates Alexander Chernov, an attorney representing the interests of Ms. Mirimskaya, "but we have yet to receive any confirmation one way or the other".

We have witnessed this story unfold from the very beginning and it is one that could challenge some of the most convoluted drama series played on television.

The first episode begins with a happily married woman and her wealthy husband deciding to have a child together. Like many other couples these days Olga and Nikolai decided to take advantage of modern medicine and engaged the services of an in vitro fertilization (IVF) clinic. The couple applied for a surrogacy program with a Moscow-based "DeltaMedKlinik". A few months hence a surrogate mother was selected by the spouses - a resident of Crimea, Svetlana Bezpyataya. This would be Svetlana's fifth surrogate pregnancy, not counting her own daughter, Alina. By all means Svetlana was considered a highly experienced surrogate mother with a good reputation and an excellent track record. After agreeing to bare a child for the business couple, Svetlana has signed a surrogacy contract and carried out all the mandatory medical and legal procedures. This commission was critical for Svetlana. Due to her age, it was clear that this would likely be her last surrogate pregnancy after which her only major source of income would be extinguished.  At the same time her unemployed husband could barely make ends meet back in Crimea and struggled to provide for their fifteen-year-old daughter.

Months went by, everyone were preparing for the arrival of the newborn child. Olga and Nikolay have decorated the nursery, interviewed nannies and even settled on a baby name, Sofia. But suddenly the relationship went sour and the couple split up.

While devastated by the break up Olga continued to support the surrogate mother, tending to her every need and most bizarre requests. Meanwhile, Svetlana was preparing to leave. According to numerous media reports, it was Nikolai Smirnov who convinced the surrogate mother not to give the child to Mirimskaya and flee the country instead, taking the child with her. According to "Komsomolskaya Pravda", that references official investigation materials, a few days before giving birth Svetlana disappeared from the clinic, skipping all her scheduled appointments. After the baby was born she requested for the birth certificate to be issued in her name, listing her husband, Andrey, as a biological father. She then immediately obtained a travel passport in Sofia's name and left the country less than a week after the girl was born.

The second act takes place in Cyprus, where Svetlana ended up taking Sofia, ignoring her surrogacy contract and leaving the biological mother, Olga, in tears and utter despair. Various press reports suggest that it was in Cyprus, where Svetlana reunited with Nikolay Smirnov, and submitted Sofia into his full custody, in return for a cash reward (according to "Komsomolskaya Pravda", Svetlana received no less than 800 thousand rubles or roughly $12,000). But that was just the beginning. Over the course of the past 9 months Smirnov has provided Svetlana's family (both her daughter and her husband were transported to Cyprus shortly following her own escape from Moscow) with a number of perks and other compensation - ranging from luxury apartment rentals, food, clothing, tuition in the best private school in Cyprus and a Mercedes Benz vehicle.

It was only later, during the fall of 2015, that the police authorities have qualified Svetlana's actions as a "transfer of the minor child to third parties" and the fact she took compensation for it was interpreted as "human trafficking". Eventually, a criminal case was filed against Svetlana Bezpyataya on numerous counts of fraud and human trafficking. She is currently on Interpol's red alert wanted persons list.

For months Svetlana and her lawyers relentlessly tried to argue, in both Russian and Cypriot courts, that she is Sofia's real biological mother and that she has never taken part in any surrogacy programs.

One would think that these statements would be completely rebuffed after a genetic test that was carried out as part of court proceedings in Cyprus. These tests clearly established no relationship between Svetlana Bezpyataya or her husband and the newborn child. For a while, however, Svetlana managed to use trickery and dual court process in Russia and Cyprus to mislead authorities.

For example, at some point Svetlana's lawyers managed to obtain a first instance ruling in the Taganskiy district court of Moscow, rendering her surrogacy contract invalid. Unfortunately for Svetlana, this decision was obtained improperly, violated the Russian court process and was later dismissed by the Moscow City court. However, before that took place Svetlana has used that ruling to file a private prosecution against Ms. Mirimskaya in Cyprus, accusing her of falsifying surrogacy documents. Of course, all charges against Olga Mirimskaya in Cyprus were eventually dropped, but it caused many months of procedural delays and provided Svetlana the opportunity to escape criminal prosecution, once again dragging innocent child Sofia along with her.

As of today, Svetlana Bezpyataya is on the run. Law enforcement agencies of Russia, Cyprus and the United States, as well as Interpol, are searching for her, intending to bring charges of fraud and human trafficking. In the meantime, Sofia is almost 1 year old and growing up in hiding without a real mother or stable home, as any child of her age deserves.

A few days ago, the Supreme Court of Russia upheld the decision of the Presnenskiy district Court of Moscow, confirming Olga Mirimskaya as the only legitimate mother of Sofia. As reported by the Russian news agency for legal and judicial information (RAPSI), the Supreme Court dismissed the appeal application of Svetlana Bezpyataya. This draws an end to complex litigation, which has the potential to set a precedent in the Russian law, establishing the rights of genetic mothers.

Unfortunately, even high court decisions and criminal investigations do not stand in a way of opportunistic journalism. Just a couple of days ago Mr. Solovyov conducted a live broadcast through radio channel "Vesti-FM» interviews with infamous bloggers, like twice convicted Oleg Lurie, as well as Svetlana's Russian lawyers, dispersing false stories about the fugitive surrogate mother. One of the alleged stories is that Svetlana simply obtained donor material from Nikolai Smirnov for her personal IVF. What moved Smirnov to become a donor for this woman, a professional surrogate mother, and how her husband reacted remains a mystery that the interviewees chose to omit.