World's largest umbrellas to be installed in Mecca's Grand Mosque

The works to install the world's largest folding umbrella started last week on the northern courtyard of Mecca's Grand Mosque. It will be the first of eight high-tech giant umbrellas. As many as 54 smaller umbrellas are to be installed in the Grand Mosque during the upcoming six months. 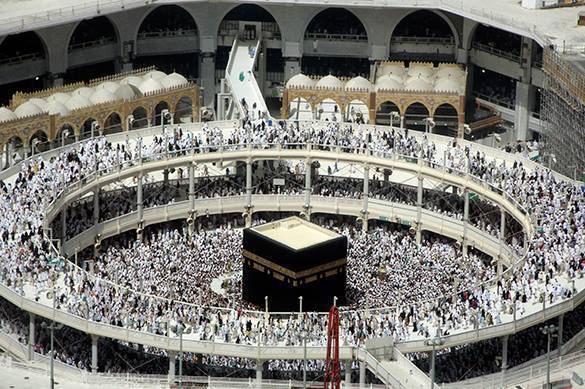 The giant umbrellas were made in Germany. The shades will come complete with clocks, guiding screens, air conditioners and surveillance cameras. Each umbrella will be 45 meters high and 16 tons heavy. Once all open, the umbrellas will protect people from the sun on the territory of 2,400 square meters, gulfinthemedia.com reports.

More than 25 engineers, technicians and security specialists from Germany will supervise the installation process, as well as the operating electronic mechanism.

Fifty-four smaller shades will be installed in the northern courtyard on the territory totaling ​​19,200 square meters. When the project is complete, as many as 400,000 worshipers will be able to hide from the sun in the shaded area.