Obama saddened he could not congratulate American gays

US President Barack Obama has not been able to congratulate the Americans of the LGBT community on the legalization of same-sex marriage across the country. The American leader was planning to hold the event near the White House, but the US Secret Service disrupted Obama's plans. 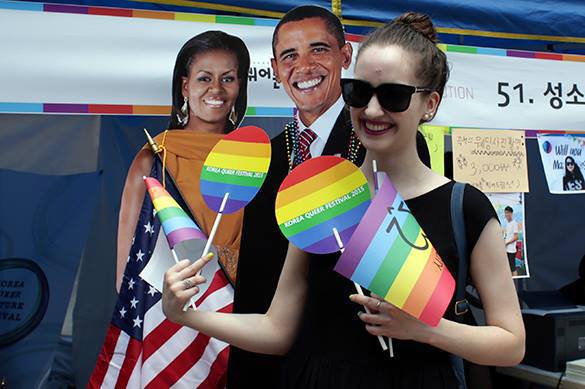 Representatives of the security of the Obama administration said that the president would not be able to go out and congratulate the LGBT people, as it would be fraught with danger for him.

"I did not have a chance to comment on how good the White House looked in rainbow colors. That made it a really good week. To see people gathered in an evening outside on a beautiful summer night, and to feel whole, and to feel accepted, and to feel that they had a right to love, that was pretty cool," The Washington Post quoted Obama as saying.

Politonline.Ru wrote with reference to a Gallup poll that Obama's support among homosexual individuals in the USA was higher when compared with the support Barack Obama has among heterosexual US citizens.