In India, women thank men for not raping them. This is the essence of a new media campaign, in which women are encouraged to thank the men who let them live without assaulting them physically or sexually. 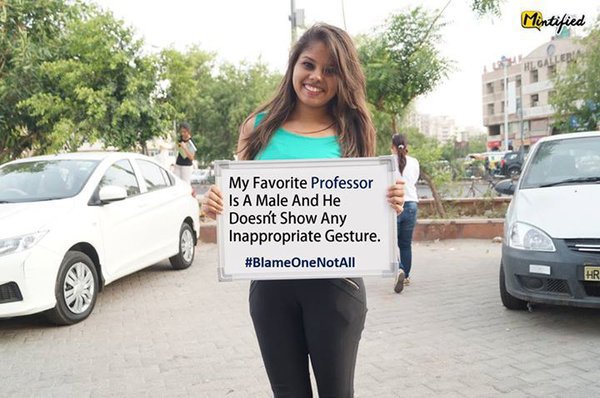 "We do agree that a woman has to go through a lot. The leering, the catcalls, the groping, the societal othering, the miasma of all this that women bear the brunt of every damn day. Every single day is a war to them. BUT generalising the other gender, is not right. Not all men are rapists. Not all men abuse their significant others. Not all men actively oppress women. And these posters say it all. #BlameOneNotAll"

It appears that the campaign tries to justify men just for being men whiling missing out the problem of lost women's lives completely.

In 2012, medical student Jyoti Singh was returning from an evening screening of Life of Pi with a male friend when the pair boarded a private bus. Bus driver Mukesh Singh and five of his friends beat Jyoti's male friend and then brutally gang-raped the young woman. They ripped out a portion of her intestinal tract with an iron bar. The woman died from injuries about two weeks later.

The story received international attention and caused worldwide outrage. However, the bus driver was unrepentant.

"A decent girl won't roam around at nine o'clock at night," he told a BBC documentary team.

In India, a woman suffers from rape every 20 minutes. Below is the list of a few blood-chilling rape incidents that took place in India in March of this year.

Also read: Rape and violence in India: Does anyone care?

- A 16-year-old hung herself to death from a ceiling fan. She was gang-raped the month before near the capital New Delhi;

- 27-year-old female tourist from Kazakhstan was gang-raped by three local men at her hotel in New Delhi;

- A 21-year-old employee of a five-star hotel was abducted and gang-raped in a car by three unidentified people in Ludhiana;

- A 16-year-old girl from Basanti, West Bengal was gang-raped and then viciously hacked with meat cleavers. She is fighting for life in a Kolkata hospital.