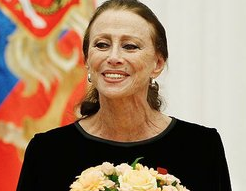 Ballerina Maya Plisetskaya, one of the most famous ballet dancers of our times, died on May 2 in Germany as a result of a heart attack. She was 89 years old.

Maya Plisetskaya will be buried in Russia, General Director of the Bolshoi Theater Vladimir Urina said.

Russian President Vladimir Putin expressed his deep and sincere condolences to the family, friends and all fans of the great Russian ballerina, the press service of the Kremlin said.

Russian Prime Minister Dmitry Medvedev, in turn, noted that "a whole era of ballet was gone" with Plisetskaya, Pravda.Ru reports.

Maya Plisetskaya was born on November 20, 1925 in Moscow. In June 1934 she entered the Moscow Ballet School. Her father and mother were repressed. When the war started, Maya and her mother, who had returned from prison by that time, had to escape from their place of living.

As a member of the Bolshoi until 1990, her skill as a dancer changed the world of ballet, setting a higher standard for ballerinas both in terms of technical brilliance and dramatic presence. As a soloist, Plisetskaya created a number of leading roles, including Moiseyev's Spartacus (1958), Grigorovich's The Stone Flower (1959), Aurora in Grigorovich's The Sleeping Beauty (1963), Alberto Alonso's Carmen Suite (1967), written especially for her, and Bejart's Isadora (1976). Also among her most acclaimed roles was Odette-Odile in Swan Lake (1947). A fellow dancer stated that her dramatic portrayal of Carmen, reportedly her favorite role, "helped confirm her as a legend, and the ballet soon took its place as a landmark in the Bolshoi repertoire." Her husband, composer Rodion Shchedrin, wrote the score to a number of her ballets.

The actress lived predominantly in Germany. She would occasionally come to Moscow and St. Petersburg with her husband. The ballerina received numerous honors and awards.

Plisetskaya had danced on stage for almost 60 years, with almost 50 of them - on the Bolshoi Theater stage.