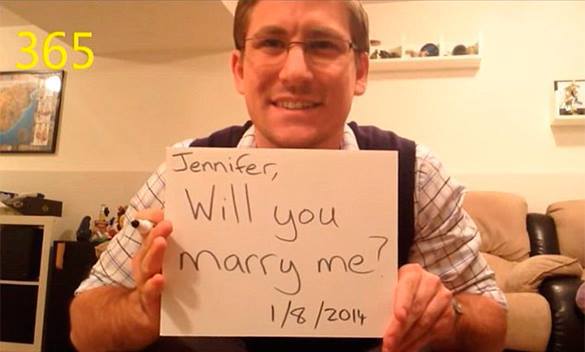 Love knows no boundaries, a man from the United States Dean Smith has proved it once again. The man from Scottsdale, Arizona, was asking his girlfriend, Jennifer Kessel, to marry him for 365 days in a countdown video.

The video of the year-long proposal has received 13,018,294 views on YouTube. The clip shows Dean proposing Jennifer in various and unexpected circumstances: during breakfast, cleaning, in a shower, while shaving, flossing and many other situations, reports Pravda.Ru.

As a result, the woman said yes. At the end of the video, Dean Smith knelt on one knee in front of her, apparently, presenting Jennifer with a wedding ring. All the family were with them at the moment, when it happened.

Man asks his girlfriend to marry him 365 times in one year in viral YouTube video
19:22
Russia launches 170-meter-long surprises for Washington
14:52
Russian adult dwarf blogger Hasbik appears as little kid in fast food chain ad
14:02
USA's new bill on sanctions puts Washington on a new level of absurdity
20:01
Russian Navy creates threat much more powerful than Cuban army base off US coast
19:10
Russian Central Bank considers banning cryptocurrencies
17:13
Ukraine tensions: The true picture
16:33
Russian MPs urge Putin to recognise People's Republics of Donetsk and Luhansk
16:15
Russia's six large landing ships travel to Black Sea
15:55
Russia prepares a surprise for USA and NATO in Vietnam and Iran
14:48
Cuba, Venezuela or both? Russia wants USA to know what it feels like to be surrounded by NATO
Health
Four mutants of the coronavirus