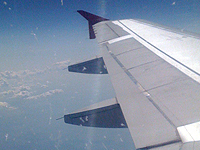 Lifejackets continue to disappear from airplanes arriving at the Novosibirsk airport of Tolmachevo. Last year, there were three of such thefts reported. This year, ten rescue vests have been stolen, officials with the regional Interior Ministry reported.

In March, traffic police detained two passengers of Khabarovsk-Novosibirsk flight. In the course of inspection, lifejackets were found hidden in their hand luggage. The detained young men - residents of the Khabarovsk and Amur regions - admitted that they had stolen the vests to subsequently use them on a fishing trip.

A similar incident was reported in September. At the airport Tolmachevo, a 27-year-old resident of the Samara region was detained after he had stolen two lifejackets from a plane. The man arrived in Novosibirsk from Magadan.

The people, who committed the theft of rescue equipment, do not consider their actions criminal, officials said. It does not even occur to perpetrators that their actions jeopardize the safety and lives of passengers in case of possible emergencies, police officers said.

Life jackets on board aircraft are considered airlines' property. Their exemption without the knowledge and consent of the owner is regarded as theft of property and, accordingly, entails legal consequences provided for under the criminal law, Interior Ministry officials said. This crime falls under h. 1, Art. 158 of the Criminal Code providing for up to two years of imprisonment.