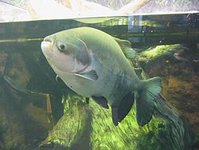 A fisherman from Arkhangelsk caught a bizarre fish with a human-like jaw. As it turned out, the fish was a guest from the tropics that swam into the waters of the Northern Dvina River, reports NTV.

The man, Alexander Korobov, is an experienced fisherman. However, the fish that he caught one day in the river, literally shocked him.

"I took it in my hands and smelled it. It seemed to be fresh. I opened the gills - they were red. Yet, the mouth did not look like the mouth of a bream. I opened its mouth and was horrified to see human-like teeth in there. I got scared a bit," the man said.

Korobov then went to a local department for fishery, where specialists found it difficult to identify the catch.

Andrey Rumyantsev, senior inspector of the Department of State Control and Protection of Water Resources of the Arkhangelsk region:

"The fish looks like a bream, but the scales of it and the presence of adipose fin makes it look like salmon. Yet, salmon can not be the size of bream. The teeth of the fish looked like human. This fish is not from our region," the specialist said.

Scientists at the Institute of Fishery and Oceanography believe that the fish is a piranha. "This is a piranha, but the fact is that there are more than 90 species of piranhas. This fish is a herbivorous piranha," a scientist said.