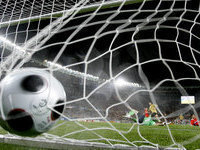 Italian portal Gazzetta dello Sport, conducted an independent study analyzing the traffic of most popular pornographic websites around the world during the days of the World Cup in Brazil.

It was revealed that during the broadcast of football matches, the number of visitors of such websites falls sharply. However, during the first minute of the break or the final whistle, the traffic starts growing very fast. The growth is especially fast in the countries, whose teams lose.

According to the study, during the game between Brazil and Croatia, the drop in traffic ranged from 60 to 75 percent. The same figures were recorded in the first half of the game between Germany and Portugal. During the break, when the score was 3-0 in favor of the Germans, the traffic returned to normal figures.