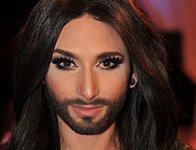 The Moscow authorities did not allow gay activists to hold "The March of Bearded Women and Men named after Conchita Wurst" on May 27. The march was supposed to be dedicated to the 21st anniversary of the abolition of criminal prosecution for homosexuality in the Russian Federation.

"The decision of the city authorities will urgently be appealed in court, so we can get the verdict before the date of the scheduled public event," said the founder of the Moscow pride movement, Nikolai Alekseev.

He also said that on May 16, Russian gay activists would apply for the permission to hold a traditional annual gay pride parade in Moscow, scheduled for May 31. "If the authorities do not coordinate the parade either, as it has been during the last eight consecutive years, we will combine the "bearded march" named after Conchita Wurst and the gay parade on the same day, May 31," he promised.

Transvestite  artist from Austria, Thomas Neuwirth, who appeared this year at this year's Eurovision song contest in the image of a bearded woman Conchita Wurst, won the first place in the competition. Noteworthy, 'wurst' translates from German as 'sausage.'

In Russia, the majority of people found the appearance of the Austrian artist revolting. Representatives of the Russian Orthodox Church, as well as a number of MPs, interpreted his/her performance as "propaganda of homosexuality and moral decay." It was proposed to ban public performances of Conchita Wurst in Russia. According to MPs, the stage image and songs performed by the bearded creature of indeterminate gender are an affront to the majority of the population of Russia and any other country.

Many young Russians joined the latest Internet fad "Prove you're not Conchita." Many people, including celebrities, started to massively shave their beards and post their "before and after" photos on the Internet.