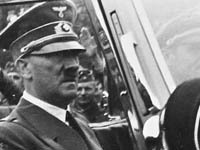 Rochus Misch, the bodyguard of Adolf Hitler during most of World War II, has died at the age of 96.

Misch was the last surviving witness to the last hours of the Nazi leader in the Berlin bunker. He died after a short illness in Berlin. Until the last days of his life, he was proud of his acquaintance with Hitler and affectionately called him "the boss."

In a 2005 interview, Mish described Hitler as a "completely normal person."

"He was not rude. He was not a tyrant . He was not a superman. He was a great boss. I worked with him for five years, we were the closest people to him," he said.