Yeti village to be built in Russia's Kuzbass

A whole village will appear at Sheregesh ski resort in Kuzbass dedicated to Yeti. The project is being developed by one of hotel complexes of the resort. 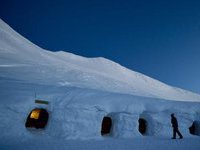 The press service of the regional administration said that there will be houses for tourists, a chain of restaurants, health care centers, an entertainment center for children - the Yeti Park - and the residence of Yeti in the village.

The whole project has been designed mostly for children. There is a program to "hunt" or the Yeti in the village: "The Path of the Shaman" and visiting a tall tent, where fairy tales characters will be playing games with children.

Noteworthy, in October last year, specialists of the Russian State Hydro-Meteorological University and the Zoological Institute completed the study of DNA fragments of wool that were found in the Azassky Cave (the Kemerovo region) during last-year's expedition to find the Yeti.

The researchers came to conclusion that ten hairs in their possession did not belong to a human being. "They are from a mammal, but it is not a bear, goat, wolf, or any other animals inhabiting the territory," chief researcher of the University, Doctor of Biological Sciences Valentin Sapunov said.