The video of an eagle snatching a child in Canada that received more than 16 million hits on YouTube, was a skillful fake, several students admitted. 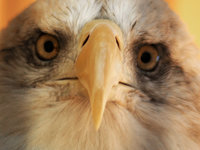 The video showing a large golden eagle snatching a little boy in the heart of Montreal appeared on December 18th. The camera captured the moment when  the eagle dives from a height, snatches the child, carries the boy for a few meters and then drops him to the ground. The boy suffered no injuries during the fall.

The video was viewed by 16.03 million people, nearly 19,000 people left comments to the video.

The authors of the popular video - Canadian students - said that they only practiced their skills in computer graphics. The whole story was a fruit of their imagination.

However, many people do not believe that the video was fake. "I am a 3D-artist, and this is not a fake. All physics looks very natural - this is neither animation nor computer graphics. There is no computer program that can produce such an effect, " wrote one of the users.