Outstanding dancer of the second half of the XX century, who went down in history of ballet owing to her phenomenal creative longevity, ballerina Maya Plisetskaya celebrates her 87th birthday on November 20th. 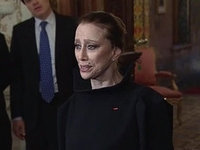 The legendary ballerina will celebrate her birthday in Munich, where her husband, composer Rodion Shchedrin works, Vesti.ru reports. Maya Plisetskaya was dancing for almost 60 years, and about 50 of them - on the stage of the Bolshoi Theatre.

Maya Plisetskaya was born in Moscow on November 20, 1925. Her father was a consul general in Svalbard, whereas her mother worked as an actress of silent movies. At the age of nine Maya entered the Moscow Ballet School, where she was a student of Gerdt, and later of Vaganova. Prior to her graduation, she had danced at the Bolshoi Theatre, and later became a soloist in the troupe.

She performed almost all of the lead roles in the classical repertoire. She has danced in the "Swan Lake" for more than 800 times by her own count.

Maya Plisetskaya has the title of the Hero of Socialist Labor. She was awarded with the Lenin Prize and a great deal of other awards. Minor planet number 4626 was named after the outstanding ballerina.