In the Chinese city district of Changde, the Hunan Province, a 23-year-old fan of online game World of Warcraft spent two months in an Internet café, never budging from the place. 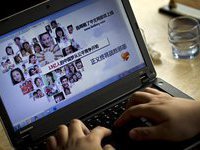 The news of the Chinese man first appeared on a gaming forum. Not that long ago, a more detailed article was published on the famous news portal Tencent. According to journalists, the young man settled in the most remote corner of the cafe, at computer No. 76. His desk could be noticed at once: the gamer ate and slept there, without leaving the "work place." The young man did not change his clothes, nor did he take a shower throughout his stay in the café. As a result, his appearance and smell started to scare away other customers from the Internet cafe.

However, the café owner said that the fanatic paid for the computer accurately, so the administration had no complaints about the client and no legal grounds for his expulsion. From time to time, café employees tried to persuade the man to have a short break, but only heard the negative answer in response.

Jiang Tao worked as a regional manager at an IT-company, where he was paid about $ 1,100. When the company went bankrupt, he lost his job. Chinese Internet cafes are open round the clock, seven days a week. The cost of "living" in an Internet café in China is less than living in a hotel, reports Onliner.by.

For the unemployed Chinese, the virtual world is not fun - it is a source of income. He spends all day in the game, earning virtual gold and rare equipment. The valuable "goods" ​​are then sold on various websites - they enjoy very good demand. The gamer promised to find a job within a month and leave afterwards.

Such stories often end tragically. This summer, aт 18-year-old Taiwanese died after he had been playing Diablo III for 40 hours. In St. Petersburg, a 17-year-old teenager, who didn't work or study anywhere, killed his mother, who did not let him play Counter-Strike. In addition, a 22-year resident of Cheboksary, a big fan of computer games, wanted to see how a human being dies in reality. The young man killed his 83-year-old grandmother. In an online club in Taiwan, a visitor died after playing video games for too long. The cafe was packed with people, but they were too busy with their games and did not notice the dead man for about nine hours.