The oldest female resident on Earth, Antisa Khvichava, a native of Georgia (former USSR), died at age 134. The woman from the village of Sachino was born in the century before last - on July 8, 1880. 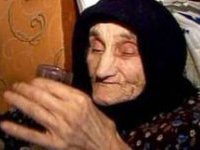 The Georgian authorities asked Guinness Book editors to prepare a certificate to confirm that Antisa was the oldest woman in the world, Georgia Online reports. Spokespeople for the book said Antisa was indeed older than 132 years.

The long-living woman was an honorary citizen of the city of Tsalenjikh, adds Mir. Many noted that even at 130, Antisa was thinking clearly, enjoyed playing backgammon and occasionally allowed herself a shot of vodka. To prove her longevity, the woman had a Soviet passport and pre-revolutionary documents.

Antisa had 12 grandchildren, 18 great-grandchildren and 4 great-great-granddaughters, notes BaltInfo. She survived WWI and WWII, the creation and the collapse of the USSR, the restoration of Georgia's independence and the difficult period of the 1990s.

It is worthy of note that the oldest resident of India, Parsaram Gurdzhar, died last winter of last year at age 125. A few months later, 115-year-old Tieno Hasegawa died in Japan. In September this year, Magomed Labazanov, the oldest citizen of Russia, died in Dagestan. The man was 122 years.