A polar bear attacked a woman who, after drinking too much alcohol, decided to feed the "clumsy" bear with chicken legs. The incident took place in the Chaunsky district of Chukotka, Russia's Far East. A policeman, who heard cries for help, saved the compassionate lady from the claws of the bear. 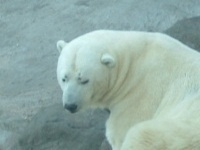 The incident occurred in the village Yanranay. Sergei Terekhov, an assistant to police precinct, heard the screams. The man grabbed a gun and ran out into the street. He saw a polar bear dragging the victim to the side of the tundra, writes FederalPress.

The police officer wounded the animal with his first shot. Having taken the moment, the woman crawled a few meters away from the predator. This made it possible to make another shot, which killed the bear. The woman was immediately sent to hospital. Doctors said that her life was out of danger: several bite wounds had been treated and stitched.

The villagers had been warned of possible appearance of polar bears in the area. A few days ago, a bear roamed into the village, but was driven out of the settlement. Local residents were asked to have their weapons at the ready, and not to go out without the need.

However, the woman did not listen to the recommendations. Moreover, having spotted the polar bear among garbage tanks, she decided to feed chicken legs to the bear. The victim of the bear attack admitted that she had taken alcohol prior to the incident "so the inadequacy of her behavior was understandable", reports NTV.