Fountain of vodka to be built in Georgia

An unusual fountain is expected to appear in the city of Batumi, Georgia, at the end of the upcoming summer. A tower to be erected in Gogebashvili Street will be pumping flavored vodka, known as chacha, or grape brandy, instead of water once a week for 10-15 minutes. 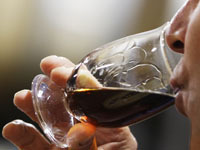 The goal of the project is to attract tourists. The authors of the project say that the fountain will be "erupting" the vodka made only by local Georgian companies, Business Georgia website said.

In addition to the fountain, the tower will house an information tourist center, four open-air swimming pools and other facilities.

"It will be a 25-meter-high building in Asian style. One a week, the fountain will be shooting vodka instead of water. The main function of the tour is to advertise the city and attract tourists," Irina Shervashidze, the head of the press service of the municipal administration said, Rosbalt reports.

Chacha is a strong alcohol beverage made from grapes. The beverage is widely popular in Georgia. Many Georgians like to make chacha from the grapes that they grow themselves.