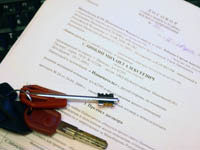 On December 13, the Minister for Construction of the Nizhny Novgorod, Vladimir Chelomin, gave the keys to new homes to young specialists. The specialists take part in the program titled "Socio-economic support for young specialists" in the Bogorodsky district. Six families will celebrate the New Year in new homes.

As many as 2,500 people have taken part in the program; 914 houses have been built for young specialists. 62 families have received new homes in the Shatkovsky district from 2006 to 2010.

In 2001, eleven young specialists have received the keys to their new homes in Bogorodsk. There were six teachers, three doctors, two physical training coaches and a cultural worker among them. The wooden cottages (66 m2) are equipped with gas, electricity and water supplies, News-NN reports.