Man tries to dodge army service like Spiderman in underwear 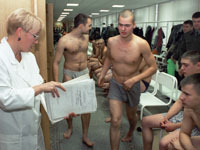 Russian men of service age may make desperate moves at times to avoid the army service. In the city of Vologda, a young man climbed from the roof of one building to another on electric power cables in an attempt to escape from military commissars. The man ran away wearing only his underwear, but was caught anyway.

"The 24-year-old young man performed a dangerous stunt. He climbed on electric power cables from the roof of the nine-storied to the five-storied building. The man was wearing boxer shorts and a tank top," officials said.

As soon as the dodger reached the roof of the five-storied building, a fire brigade detained the man and took him down. Police officers were already expecting him, RIA Novosti reports.

The autumn conscription in Russia begins on October 1 and lasts through December 31. Deputy Chief of Staff of the Armed Forces of Russia Vasily Smirnov said that more than 200,000 people had dodged the army service this year.