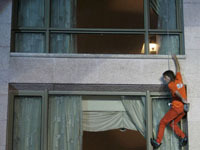 Robert started the climb at approximately 12:30 p.m. and finished by 2:20 p.m. He stated that he had some difficulties during the last 15 meters as his foot was occasionally slipping. Upon reaching the top of the building, he waved the Turkish flag for spectators.

Alain Robert said his first climb was when he was 10, adding that he drinks plenty of water and eats rice or pasta before climbing, according to.

Robert has climbed more than 80 of the world's tallest structures, including the Eiffel Tower in Paris, Malaysia's Petronas Towers, and the 88-story Jin Mao Tower in Shanghai.

He recently scaled Dubai's Burj Khalifa, the highest building in the world, says.

Robert, 48, has scaled more than 70 skyscrapers, including New York's Empire State Building and Chicago's Willis Tower in the United States, and the Petronas Towers in Kuala Lumpur, Malaysia.

Many of his illegal climbs took the French urban climber to courtrooms in several countries.

However, Robert said, his lawyers saved him from ordeal. Most recently, he was sued because of a climb in Australia but the case has been dismissed as he was not allowed to enter Australia.

Robert says his philosophy is to promote freedom.

"We were free in the past and now we are losing this freedom. This is what I want to tell people by the help of my climbs," he says, according to .