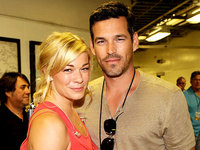 Grammy-winning country music singer LeAnn Rimes tied the knot Friday night with the man who broke up her first marriage.

Rimes, 28, wed "CSI: Miami" star Eddie Cibrian, 37, in an intimate ceremony in Los Angeles in front of about 40 guests including the groom's sons Mason, 7, and Jake 4, from his previous marriage.

Rimes and Cibrian led their guests to believe they had arrived for an engagement party -- but instead the couple surprised them with a wedding, according to .

Another thing she has staunchly defended is her relationship, even though it began in 2009 as an extramarital affair on a TV movie set while both were still wed to their previous spouses. "I didn't have the tools to know how to do it the right way, how to let go the right way," Rimes recently said of ending her marriage to Dean Sheremet, who's now engaged to a new girlfriend. "I'd never been taught that."

Cibrian was in an eight-year marriage to Brandi Glanville, the mother of his two sons, when he first fell for the Grammy-winning singer. In January, Glanville said, "There is still a lot of animosity, but hopefully, one day, we can move through that and get to a better place," reports.