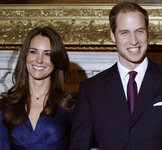 Prince William and Kate Middleton have announced that their wedding will be held on April 29, 2011, at the Westminster Abbey in London. The announcement comes barely a week after the two revealed their engagement.

The Westminster Abbey, built centuries ago when England was still a Catholic kingdom, is where British and English monarchs have been crowned since 1066. It has also hosted the weddings of monarchs including William's grandmother, Queen Elizabeth II, who married Prince Philip the Duke of Edinburgh in November 1947, RTTNews reports.

The princes' private secretary, Jamie Lowther-Pinkerton, said the couple had chosen the venue for its "staggering beauty" and that they wanted the day to be a "classic British occasion with good spring weather".

He said: "They are very much in charge of the arrangements. I have never seen two happier people. They're on cloud nine, like any other newly engaged couple," The Guardian says.