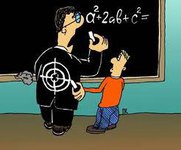 A teacher who lost her voice trying to make herself heard in a noisy classroom has accepted more than £150,000 in compensation. Joyce Walters quit teaching after developing nodules on her vocal chords which she said were caused by having to raise her voice over the noise from a children's play area near her classroom in Hillingdon, north west London.

The 50-year-old English teacher underwent months of speech therapy after the nodules were discovered through surgery but said she is still unable to speak for more than a short period before her voice becomes hoarse, Telegraph reports.

The vocal chord nodules were discovered through exploratory surgery. She claims she repeatedly asked for help from her bosses at the centre but nothing was done.

After taking the council to a disability discrimination employment tribunal, she was awarded an out-of-court settlement of £11,000; a second settlement, of £145,000, was agreed in July following a separate personal injury claim, The Guardian informs.