Sunday night's MTV Movie Awards were a thrilling, hilarious romp through the world of cinema as seen through the eyes of MTV. Among the highlights were the premiere of a new scene from "The Twilight Saga: Eclipse," a preview of Christina Aguilera's upcoming album Bionic, multiple appearances by show producer Les Grossman and multiple images of a near-nude Katy Perry. 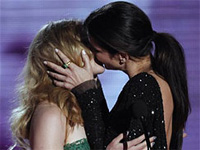 But the award for biggest moment of the night was not Ken Jeong's heartfelt acceptance speech or the many wins for "The Twilight Saga: New Moon." Rather, it was the tribute to Sandra Bullock (who took home the MTV Generation Award as a salute to her long and varied body of work) that culminated in a kiss between Bullock and Scarlett Johansson.

Though the pair have never been in a film together, Bullock did co-star with Johansson's husband Ryan Reynolds in the 2009 hit "The Proposal" (which also starred Betty White, who is totally fine with Bullock's smooch), MTV.com reports.

Sandra Bullock is kissing and telling about her surprise smooch with Scarlett Johansson at the MTV Movie Awards Sunday.

"Ryan is right -- Scarlett is a great kisser," she tells UsMagazine.com exclusively.

Johansson, 25, filled in for husband Ryan Reynolds (who costarred with Bullock in last summer's The Proposal and couldn't attend the show) to present Bullock, 45, with the Generation Award -- along with Bradley Cooper and Betty White, UsMagazine.com reports.