The Razzie Awards nominations - highlighting the worst achievements in films of 2009 - came out today. 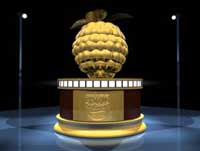 Transformers: Revenge of the Fallen and Land of the Lost are leading the pack. Each earned seven Razzie nods.

Tom O'Neil's Gold Derby blog points out two key things:  Oscar ceremony co-host Steve Martin is nominated for worst actor in Pink Panther 2. No other actor has ever been up for a Razzie the same year he or she emceed the Academy Awards. And Sandra Bullock, who will likely snag an Oscar nomination tomorrow for The Blind Side, is nominated for a Razzie for All About Steve.

If Bullock claims both trophies, she'll be the first star ever to pull off the dual win in the same year.

The Golden Raspberry Awards, frequently called the Razzies, is an award ceremony to recognize the worst in film. Founded by American copywriter and publicist John J.B. Wilson in 1981, the event precedes the corresponding Academy Award ceremony by one day.

The term raspberry is used in its irreverent sense, as in "blowing a raspberry". The awards themselves typically cost US$4.79 each, in the form of a "golfball-sized raspberry" which sits atop a Super 8 mm film reel; the whole of which is spray-painted gold.