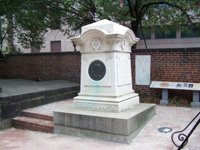 A mysterious visitor who for decades has left roses and cognac at the grave of Edgar Allan Poe has failed to show up for the anniversary of the writer's birthday.

The curator of the Poe House and Museum in Baltimore says the graveyard tradition dates back to at least 1949 and has never been interrupted before.

Tuesday is the 201st anniversary of Poe's birth and some three dozen fans waited all night with the curator, Jeff Jerome, for the visitor to arrive at the downtown church cemetery.

But early Tuesday, Jerome announced that the visitor, who  had  always appeared between midnight  and  5:30 a.m., never showed. He had no explanation why.