A first edition of Charles Darwin's seminal "On the Origin of Species" will be sold this week after it was found in a family's toilet in southern Britain, an auction house said Sunday. 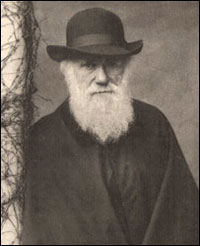 The book, which was first printed in 1859, was bought by a family for just a few shillings in a shop about 40 years ago, Christie's auction house said.

The family has since kept the work on a bookcase in the guest lavatory at their home in the Oxford area, it said.

The book will go under the hammer in London on Tuesday, to coincide with the 150th anniversary of the publication of the father of the theory of evolution's famous work, AFP reports.

The book will be auctioned on Tuesday, the 150th anniversary of the publication of the famous work. Christie's said the book is likely to sell for 60,000 pounds ($99,000).

Darwin's "The Origin of Species" outlined his theory of natural selection , the foundation for the modern understanding of evolution.

Celebrations around the world this year have marked the 200th anniversary of Darwin's birth, reports The Associated Press.

Christie's said the son-in-law of the current owners was at an exhibition on Darwin and spotted a picture of the spine of the work. He realised his in-laws' book was something special, matching the binding in the picture.

"The book is incredibly important," said, Margaret Ford, head of books and manuscripts at Christie's, adding of the current owner: "He knew it (the book) was textually important. He maybe did not know how much of a bargain he was getting," Independent informs.