Atlantis astronauts have delivered more than 14 tons of spare parts and supplies to the International Space Station over the past week, but this shuttle mission may be best remembered for a 6-pound, 13-ounce bundle delivered back on Earth. 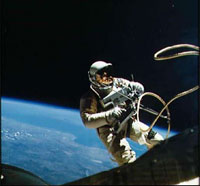 Astronaut Randolph Bresnik — the father of a new baby girl — will venture outside for the second time in three days. He will perform a series of odd jobs at the International Space Station, with help from Dr. Robert Satcher Jr.

The two will hook up a fresh oxygen tank as well as some science experiments. The first two spacewalks of the mission went so well, and the astronauts accomplished so much extra work, that only a few chores remain.

Bresnik is still walking on air following the birth of Abigail Mae. She arrived just hours after his first-ever spacewalk Saturday.

Atlantis will undock from the space station on Wednesday, The Associated Press reports.