Wednesday night in an interview on CNN’s Larry King Live, Mariah Carey says she sympathizes with Rihanna — who was attacked by ex-boyfriend Chris Brown last February — because she herself has suffered from emotional and mental abuse. 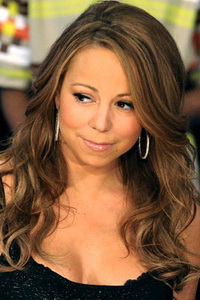 When asked how she reacted to the Rihanna news, Carey, 40, responds, “I was very sequestered, as you know, when I first started out ... I wasn’t really allowed out of the house, so I can’t imagine what she went through,” msnbc.com reports.

It was also reported, while on the show Mariah revealed that she too was involved in an abusive relationship. She explained that her partner mentally and emotionally abused her.

Abuse has several categories, emotionally, mentally, in other ways," Carey told CNN's "Larry King Live" on Wednesday night. "I just think you get into a situation, and you feel locked in — if your situation is similar to one of the situations I've been in, which I won't harp on. ... For me, to really get out, it was difficult because there was a connection that was not only a marriage but a business thing, where the person was in control of my life. -via MTV

Though Mariah did not take the liberty of revealing who the abusive partner was that she was referring to, many are speculating that she is talking about ex-husband music mogul Tommy Mottola. The two were married in 1993. Unfortunately, their marriage ended 5 years later.

Mariah has said on numerous occasions that Tommy was very controlling often times telling her how to speak and what to wear. Many have credited Mariah’s evolution into this sultry artist to her inevitable divorce to Tommy Motolla, Examiner.com reports.

In the meantime, singer Rihanna in her first television interview after Chris Brown’s assault says it was "humiliating" and "traumatizing" to admit the incident happened and that it was "wrong" of her to take Brown back.

"That's embarrassing that that's the type of person that I fell in love with," the singer, 21, told Diane Sawyer on ABC's Good Morning America Thursday. "So far in love. So unconditional that I went back. It's humiliating to say this happened. To accept that? It's a traumatizing experience," Us Magazine reports.