The 2010 Oscar awards will be co-hosted for the first time since 1989 by Steve Martin and Alec Baldwin. 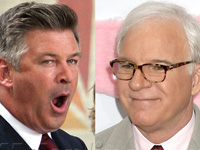 The ceremony, this time having two mcees, is scheduled for March 7 in Los Angeles and will air on Walt Disney Co.’s ABC network, according to the Academy of Motion Picture Arts & Sciences.

Martin, 64 is the show's  veteran  who hosted it in 2000 and 2002.   Baldwin 51, a newcomer , was a best supporting actor nominee for the drama “The Cooler” and has been a presenter on previous telecasts.

ABC’s telecast of the 81st Academy Awards last February attracted an average audience of 36.3 million viewers, an increase of 13 percent over the previous year as director Danny Boyle’s low-budget drama “Slumdog Millionaire” won the best- picture Oscar. Ten nominees will vie for that award in next year’s show.

Baldwin stars as Jack Donaghy in the NBC comedy “30 Rock” and has won two Emmy awards for the role. Martin is touring with the bluegrass band Steep Canyon Rangers in support of his latest album “The Crow: New Songs for the Five String Banjo,” the academy said in the statement.

Disney, based in Burbank, California, rose 21 cents to $27.62 at 4 p.m. in New York Stock Exchange composite trading. The shares have gained 22 %  this year, according to Bloomberg.