Thursday Summit Entertainment announced that it plans to rerelease the vampire-romance actioner in more than 2,000 theaters for one day only on Nov. 19 -- the day before the mini-major opens sequel "The Twilight Saga: New Moon" in even wider release. 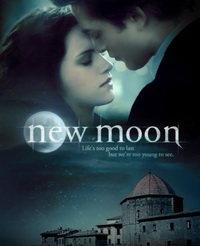 "Despite the first film already being on DVD, fans across the nation have been calling out to see the film once again on the big screen, and the studio is honoring their request," Summit said, Hollywood Reporter reports.

It was also reported, more than one month before the adaptation of the second book in the series, "The Twilight Saga: New Moon," hits theaters - on Oct. 16 - Atlantic/Chop Shop Records released the soundtrack, bumped up from Oct. 20 after the album leaked on the Internet. In its first three days of sales, the soundtrack sold 115,000, copies, according to Nielsen SoundScan, landing it at No. 2 on the Billboard 200.

For the next three months, Atlantic wants to make the "New Moon" soundtrack inescapable. The label is teaming with teen lifestyle all-stars to promote the album: Hot Topic, MTV and MySpace. For those too old to wear black nail polish, the soundtrack also will be sold at Whole Foods, Nordstrom's, Hallmark and Hollywood Video.

But besides its omnipresence, there's a secret weapon the label is deploying for "New Moon." The soundtrack features tracks from Thom Yorke, Bon Iver & St. Vincent, Lykke Li and Sea Wolf, among others - and they're all exclusive to the album.

"We had offers from artists that were incredibly wonderful and incredibly commercial, and it would have been easy to say, Oh, let's go for it because we'll sell more records' - but it wouldn't have been true to the project," says Paul Katz, founder/CEO of Eye2Ear Music, which consults with Summit Entertainment on music; Katz produced the soundtrack album and has been involved since the script stage to determine where music could fit into the film, AZ Central.com reports.

News agencies also report, legions of fans across the nation have been calling out to see the film again on the big screen and the studio is honoring their request.

According to the studio's press release, select theaters will offer tickets at a reduced price, The Los Angeles Times reports.