Bruce Springsteen canceled a performance in Kansas City after his cousin and road crew member died. The death of 36-year-old Lenny Sullivan was announced in a statement on Springsteen's Web site. 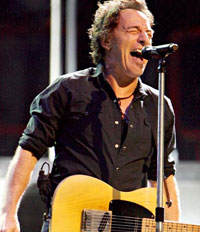 Sullivan was found dead at Kansas City's Intercontinental Hotel hours before Springsteen and the E Street Band were to take the stage Monday night.

Kansas City police spokesman Capt. Rich Lockhart said officers were investigating the death, although he said it was not suspicious, The Associated Press reports.

Kansas City police said they are investigating, but that the death wasn't considered suspicious.

It's been a tough year for Springsteen, 59, who was accused of adultery in a friend's divorce proceedings in the spring, and whose wife, Patti Scialfa, suffered a riding accident in April. Last year, the E Street Band's longtime keyboardist, Danny Federici, died at age 58.

Springsteen's next scheduled appearance is at Madison Square Garden Thursday for the Rock and Roll Hall of Fame concert, People Magazine reports.

A statement from the singer read: 'Lenny Sullivan, Bruce's cousin and the assistant road manager of the E Street Band for the last ten years, passed away today at the age of 36.

'A warm and sensitive person, he was beloved by Bruce, the Band, the crew, and the entire Thrill Hill family,' Daily Mail reports.