Fox TV and Burger King apologized this week for what they deemed was an inappropriate cartoon sketch during Fox NFL Sunday that suggested Jessica Simpson,  was fat. 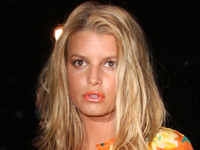 Burger King was the presenting sponsor of the skit. In it, cartoon depictions of Marion Barber and Jason Witten take shots at Simpson's weight:

Barber's character: "I still can't believe Tony dated  Simpson, even after she blew up bigger than Flozell Adams."

Witten's character: "Unlike Tony, at least Jessica comes up big when it counts."

Fox issued a statement of apology to the Dallas Morning News:

"Burger King did not have any editorial input in the creation of the animation that ran last Sunday, and no one from Burger King Corp., approved it before it aired.

"Upon reflection, our poor attempt at humor was insensitive, and we deeply apologize to anyone who might have been offended."

Romo and Simpson split up this summer after a relationship of almost two years, according to USA Today's report.