"Paranormal Activity" is positively paranormal for Paramount, as it brings good money in dark time. 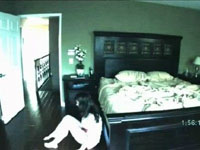 The ultra-low-budget horror film sold $535,000 worth of tickets at 33 theaters, averaging $16,000 at each. That's the biggest average of any movie this weekend except the new Coen Brothers picture, "A Serious Man."

It's particularly impressive given that "Paranormal" played only three times at each theater, at midnight on Thursday, Friday and Saturday nights. Most movies play four or five times per day at each theater -- 12 to 15 shows for the weekend -- and even more if they are on multiple screens.

Now that virtually every midnight show has sold out for the last two weekends, Paramount plans to move the film outside of the witching hour starting Friday and schedule show times throughout the day. It is also expanding "Paranormal" to 10 more markets, bringing the total to more than 40.

Paramount has very precisely opened "Paranormal Activity," which was originally bought by its former subsidiary DreamWorks Studios with the intention of creating a bigger-budget remake, in hopes of generating "Blair Witch Project"-like buzz. The movie played in 12 college markets last weekend, and Internet feedback has helped to determine in which cities the film will show.

Next weekend will test whether the studio's carefully cultivated online and media buzz is reaching beyond the young, late-night horror crowd, according to Los Angeles Times'  report.