Comedy Zombieland is at the top of the North American box office. And this appears to be the biggest film opening in Woody Harrelson's career. 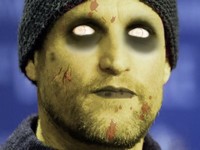 Zombieland", which features the star as a killer fighting an epidemic of the undead, took $25m in its opening weekend.

It was also reported, the strong start for "Zombieland" ended a recent trend of poor openings for horror films including "Pandorum," "Jennifer's Body" and "Sorority Row."

"The movie is more of an action comedy first and zombies are kind of like the icing on the cake," Sony Pictures distribution President Rory Bruer said of its appeal.

"Zombieland," which stars Woody Harrelson and Jesse Eisenberg, cost Sony and co-financier Relativity Media only $23.6 million to produce, meaning it's already well on its way to profitability. Studios keep approximately half of ticket sales and also have to pay for marketing, but opening with a gross bigger than production cost is usually a very good sign.

Ticket sales were virtually flat Friday and Saturday, and audiences gave the movie an average grade of A-minus, according to market research firm CinemaScore, meaning "Zombieland" will probably benefit from good buzz and play well for several weeks, The Los Angeles Times reports.

In the meantime, "Zombieland" wasn't even supposed to be a movie. Reese and Wernick were developing it for television with producer Gavin Polone. "But it was too expensive to be a show or pilot," Fleischer said. "So Gavin took it to Sony where he's made several other movies and had a good relationship and asked if they wanted to develop it as a feature."

Fleischer (on why he was hired): "They needed to figure out how to take it from being the first episode of a show that would naturally set up a series to making it a self-contained feature."

The solution he came up with was setting the film in an amusement park that would be the destination for the dramatic thrust of the script. "So it became like their Walley World," he pointed out, recalling the theme park in 1983's "National Lampoon's Vacation," Reuters reports.