Despite reports that Justin Timberlake and Jessica Biel's relationship has ended, sources tell PEOPLE the couple have not broken up. 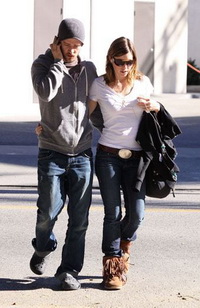 On Monday night the couple were photographed together while on a getaway in Northern California.

"They're together," says an insider. "They're not breaking up. Any time they spend time apart it's because they're working."

Over the summer, Timberlake, 28, was in Europe promoting his Givenchy fragrance and William Rast clothing line, while Biel, 27, remained in Los Angeles where she starred in Guys and Dolls, People Magazine reports.

In the meantime, other news agencies report, Justin Timberlake and Jessica Biel's relationship is dead and gone.

After a rocky three-year run, the couple has reportedly called it quits, Us Weekly reports in its latest issue. And it was the "SexyBack" singer who is said to have ended things over the phone "about a month ago."

While in New York in September to show his William Rast clothing line at Fashion Week, Timberlake was "clearly on the hunt," snitches a friend, New York Daily News reports.

It was also reported, at a club September 9, Timberlake dirty-danced with a tall blonde in a short black dress. At one point, she turned to her friend and mouthed, 'Oh, my God!'

It was reminiscent of Timberlake's guys' night out in June when he was allegedly spotted kissing a girl at NYC hot spot Avenue. Fellow clubgoer Lindsay Lohan Twittered that night, "So dark — where's jb cheater?" She later claimed her account had been "hacked," though another source tells Us she panicked after Timberlake "told all his people" to ban Lindsay and make her life miserable."

Meanwhile, Biel, 27, is in "severe denial and won't accept" the split, their mutual pal tells Us Weekly.

Another source says, "There's no way of knowing if it's a firm breakup, because with them it's so hot and cold," Us Magazine reports.